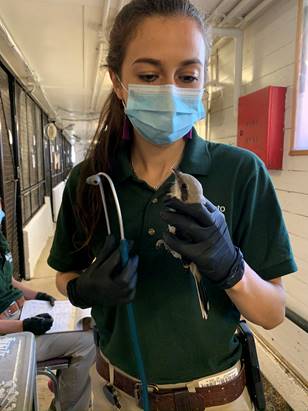 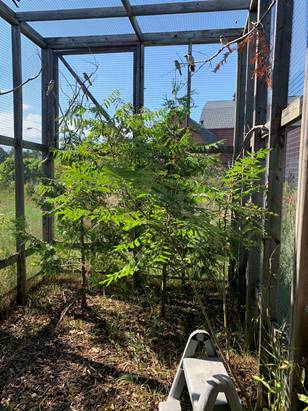 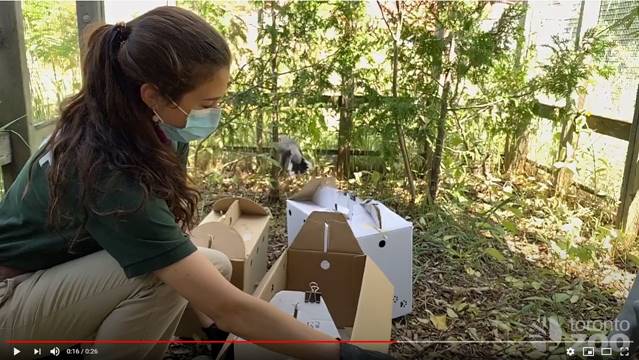 TORONTO, ON, Monday, August 17, 2020: Your Toronto Zoo continues its efforts to support important conservation efforts with the recent shipment of eastern loggerhead shrikes (ELS) for release into the wild. Toronto Zoo participates in a  conservation breeding program to help this endangered Canadian species, which are bred at one of our specialized conservation breeding centres along Meadowvale Road. Of the 13 ELS fledglings that were born this year, nine were picked up by the Wildlife Preservation Canada on Wednesday, August 12, 2020 and are bound for Carden Ontario for release. Wildlife Preservation Canada oversees the Eastern Loggerhead Shrike Recovery Program. The four fledglings that were not released will be retained to continue supporting the ELS conservation breeding population.

This year, your Toronto Zoo has 18 adult ELS, that formed four breeding pairs and three of which were successful. Due to the uncertainty surrounding the COVID-19 Pandemic, including staffing resources and ability to send birds across the US border, it was decided to only attempt four pairs and we are not attempting a second clutch with any of our pairs in 2020. Cohen (Dad) and Jane (mom) had six nestlings hatch on June 28, 2020. Then Kermit (dad) and June (mom) had five nestlings hatch on Canada Day, July 1, 2020 followed by second hatching on the same day of six nestlings sired by John (dad) and Kayleigh (mom).

“Your Toronto Zoo plays a critical role as one of only a few conservation breeding centres for eastern loggerhead shrikes, and many endangered species, in Canada,” says Dolf DeJong, Chief Executive Officer, Toronto Zoo. “With recent reports of the decline of a number of Canadian species, it is our goal to expand our facilities where this incredible conservation work takes place in order to protect, conserve and increase the populations of the eastern loggerhead shrike, and endangered Canadian species as a whole, for future generations,” he added.

Shrikes incubate their eggs for 16-18 days. After hatching, the nestlings remain in the nest for 17 days before fledging the nest and exploring their surroundings, and fledglings are ready to leave their parents at 37 days old. Currently among all pairs, 20 eggs were laid, including a nest of three eggs that were not viable.

The eastern subspecies of the loggerhead shrike is one of the most imperiled birds in North America. In Canada, loggerhead shrikes are now only found in a few isolated pockets of grasslands in Ontario, Quebec, and Manitoba. They used to be found readily from southwestern Manitoba, east to the Maritime Provinces.

In 1991, in response to a rapidly declining population, the Committee on the Status of Wildlife in Canada (COSEWIC) listed the eastern loggerhead shrike as endangered, and it is now protected by provincial endangered species legislation in Ontario, Manitoba, and Quebec. In 1992, a Loggerhead Shrike Recovery Team was formed and recovery plans were produced by 1994. In 1997, when only 100 eastern loggerhead shrikes were estimated to remain in all of Canada and a mere 18 pairs could be found in Ontario, Environment Canada established a captive population to ensure that the unique genetic material of these birds would be preserved. Between 1997 and 1998, 43 young birds were brought into captivity and the first captive breeding followed shortly thereafter. The Toronto Zoo has been involved in the captive breeding of the ELS since the program’s inception and have hatched 376 chicks.