At your Toronto Zoo, the BFF, ELS and VIM are bred and cared for under strict animal care protocols until they can be relocated into suitable habitats in the wild. The breeding and reintroduction programs at your Toronto Zoo are putting more endangered species back into the wild. But as important as they are, these conservation programs are funded almost entirely by donations and grants.  Your support for our Toronto Zoo’s endangered animal conservation programs – for our ferrets, marmots and shrikes, and all the endangered animals at the Zoo – means you are a partner in the fight against extinction.  Find out how you can support these programs through the Conservation In Action campaign.

During the 2020 breeding season, Toronto Zoo has 17 adult ferrets. On June 2, 2020, one female named Oma gave birth to a litter of six kits (four females and two males). The male who sired the kits is Curious George and both are first time parents! 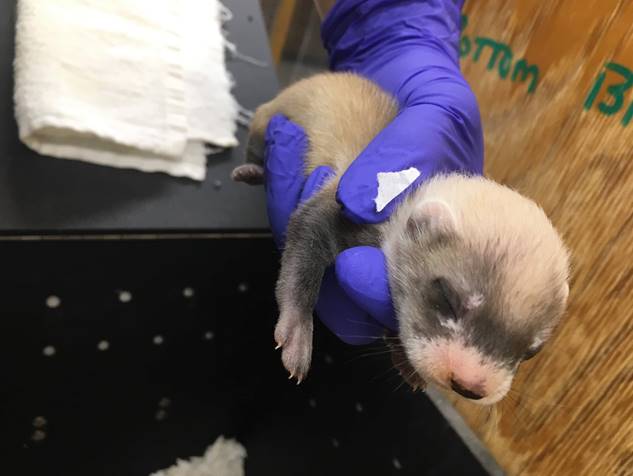 In 1997, Toronto Zoo began taking part in the conservation breeding program for the VIM, which is one of the most critically endangered animals in the world and Canada’s most endangered mammal. This species had only 30 individuals left in the wild in 2003, but the population is now estimated to be at approximately 200 animals, thanks to joint efforts from four Canadian facilities, with 162 pups born at the Toronto Zoo. Research and recovery efforts continue to protect the marmot and its habitat in Vancouver.

This year, your Toronto Zoo has seven pairs of adult marmots. On May 2, 2020 pup sounds were heard from one of the nest boxes. Keepers do not open the nest boxes until three to four weeks after first hearing sounds to minimize disturbance. On May 20, 2020, five pups started to emerge from the nest box. Since then, the pups have been venturing throughout their indoor and outdoor enclosure. They are good eaters and always finish their vegetables. Their parents, Frances (mom) and Oban (dad), seem to be a good pair when it comes to providing care for their pups. Both Frances and Oban have produced offspring before, however with different partners.

Those weren’t the only pup sounds that were heard in the VIM Conservation Breeding Centre in May. On May 23, 2020 more pup sounds were heard by Wildlife Care Keepers from the next boxes of Laura Beth (mom) and Mayne (dad), who are first time parents and this was their first time being paired in the program. It was on June 22, 2020 that three pups were seen emerging from their nest box. This is particularly exciting for this VIM breeding pair as Laura Beth is eight years of age and has never produced offspring before. Her mother shares a similar background and did not produce her first offspring until she was nine years of age. 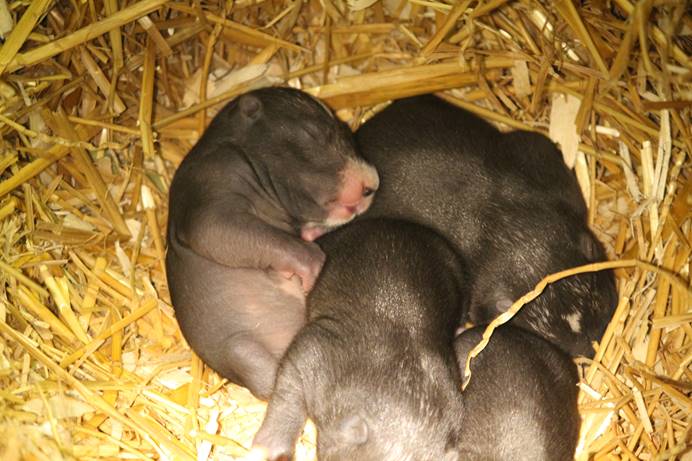 At your Toronto Zoo, breeding pairs of marmots are kept out of the public eye in the specialized breeding centre and have minimal human-animal contact for behavioural purposes. Our marmots are provided with specialized diets and multiple enclosures, which are furnished to allow for natural behaviours such as nesting, digging, gnawing and watching for predators.  Breeding takes place shortly after the marmots awake from hibernation in March or April, and gestation lasts only 30 days, though not every pair breeds every year.  Baby marmots, called pups, usually come in litters of three to four animals and remain hidden in the nests made by their parents in sheltered nest boxes for the first few weeks of their lives. Specially trained Wildlife Care Keepers rely on hearing the squeaks the marmots make to communicate with their mothers’ to signal which pairs have successfully bred. Often the pups are nearly a month old before they begin exploring beyond their nest boxes where the keepers can see them. The pups grow quickly throughout the summer and by the fall are independent of their parents. While some pups stay in the managed breeding program, most will be sent to Vancouver Island where they make the final preparations for their first over-winter hibernation and eventual release into the wild.

“Your Toronto Zoo plays a critical role as one of only a few conservation breeding centres for many endangered species in Canada,” says Dolf DeJong, Chief Executive Officer, Toronto Zoo. “With recent reports of the decline of a number of Canadian species, it is our goal to expand our facilities where this incredible conservation work takes place in order to protect, conserve and increase the populations of endangered species worldwide for future generations,” he added.

And finally, the eastern subspecies of the loggerhead shrike is one of the most imperiled birds in North America. In Canada, loggerhead shrikes are now only found in a few isolated pockets of grasslands in Ontario, Quebec, and Manitoba. They used to be found readily from southwestern Manitoba, east to the Maritime Provinces.

In 1991, in response to a rapidly declining population, the Committee on the Status of Wildlife in Canada (COSEWIC) listed the ELS as endangered, and it is now protected by provincial endangered species legislation in Ontario, Manitoba, and Quebec. In 1992, a Loggerhead Shrike Recovery Team was formed and recovery plans were produced by 1994. In 1997, when only 100 eastern loggerhead shrikes were estimated to remain in all of Canada and a mere 18 pairs could be found in Ontario, Environment Canada established a captive population to ensure that the unique genetic material of these birds would be preserved. Between 1997 and 1998, 43 young birds were brought into captivity and the first captive breeding followed shortly thereafter. The Toronto Zoo has been involved in the captive breeding of the ELS since the program’s inception and have hatched 376 chicks. 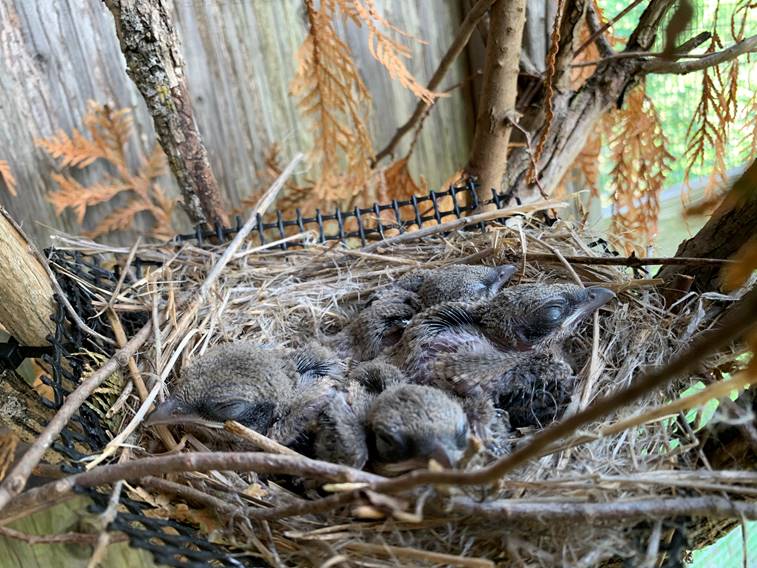 This year, your Toronto Zoo has 18 adult ELS, that formed four breeding pairs and three of which were successful. Due to the uncertainty surrounding the COVID-19 Pandemic, including staffing resources and ability to send birds across the US border, it was decided to only attempt four pairs and we are not attempting a second clutch with any of our pairs in 2020. Cohen (Dad) and Jane (mom) had six nestlings hatch on June 28, 2020. Then Kermit (dad) and June (mom) had five nestlings hatch on Canada Day, July 1, 2020 followed by second hatching on the same day of six nestlings sired by John (dad) and Kayleigh (mom).

Shrikes incubate their eggs for 16-18 days. After hatching, the nestlings remain in the nest for 17 days before fledging the nest and exploring their surroundings, and fledglings are ready to leave their parents at 37 days old. Currently among all pairs, 20 eggs were laid, including a nest of three eggs that were not viable, and there are 17 young at nestling stage of life. Most of these young birds will join the wild population this summer. 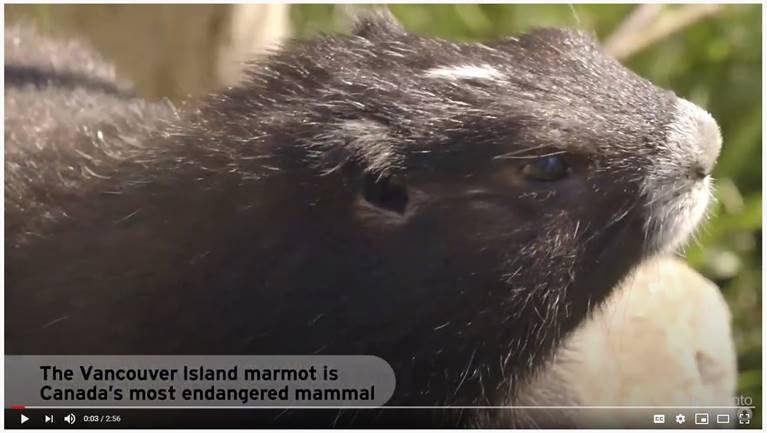